Regular listeners of Two Artsy Gals, or anyone who knows Katie IRL, know that she shouldn’t be left alone with Super Glue (or Crazy Glue or any other similar glue). It seems that no matter how hard she tries, she always ends up glued to something. The Gals covered the short list of what Katie has glued herself to in their studio safety equipment episode but it has come up several times since so we have compiled a list of some of the more notable shit Katie has glued herself to/glued to herself.

A Car – The biggest item, literally and figuratively, that Katie has found herself attached to is a “champagne” colored 1998 Mazda 323 Protégé 5sp M Sedan. If you want to know how this happened you can go back to the safety equipment episode, as Katie tells the whole story. This isn’t the car in question… that was sold about five years ago, along with the piece of Katie’s palm skin that was still attached to it. Unfortunately for us this took place before everyone had a camera built into their cell phones (Katie is not sad about this fact).

Nighty to nipple – One morning, while attempting to repair her broken steam mop while still in her nighty, Katie dribbled some glue on said nighty and it ended up glued to her left nipple.

Finger to a unicorn – Katie found a box containing her unicorn collection from way back in elementary school. Some were broken after moving around with her for 30 plus years. Naturally she glued one to her finger. 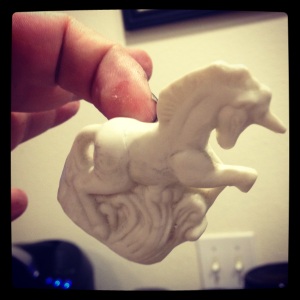 Both fingers to an elf’s head – Katie has an antique planter that use to sit in her grandma’s kitchen window. It broke and she was pretty sad about it. Not as sad as she was about gluing her fingers to the elf’s head in the process of repairing it. Note that by fingers we mean the index finger and thumb… on BOTH HANDS! Her husband took this picture before he helped her.

Thumb to a talking Travelocity gnome – Yes, Katie has a talking Travelocity gnome on her front porch. He has a motion sensor so he knows when you are coming and says a bunch of stuff (some insulting, some funny, some just really weird). No one but Katie likes the gnome so he has suffered some injuries. Most recently his legs were broken off after suffering an “accidental” fall. Katie had to perform immediate surgery. This is how she ended up with her thumb glued to his ass. (Sharon wants you all to know that this hideous picture of Katie is the pic that pops up when Katie texts or calls her. Katie wants you all to know that this no makeup, roots too long, weird face making picture of her is going up very much against her will).

A paper towel – In the aftermath of the gnome incident, in what Sharon refers to as a “strange Rube Goldberg Machine super glue nightmare”, Katie tried to clean her hands and ended up with a paper towel glued to her thumb.

Arm to kitchen counter – This one is actually sad. Katie repaired a couple of antique saucers that belonged to her great grandmother. She did this without gluing herself to either of them or to anything else. Katie was so proud of herself! But then she put her arm down on the counter not realizing that the glue she left opened had dribbled out of the tube creating a sizable puddle of glue. Talk about raining on a gal’s parade! She glued herself to the kitchen counter! (Katie wants you all to know that the skin on the underside of your forearm is far more tender than that of your fingers)

A Stapler – A piece of Katie’s stapler kept falling out. This piece was essential to its function so she got mad and broke out the Super Glue. You know what happens when she does that. nWe can’t seem to find the picture of this one but we know it exists.

A Roller Cart AND a Tube of Glue AT THE SAME TIME – A wheel broke off the podcast cart. Katie tried to fix it and glued her finger to it and the tube of glue into her hand simultaneously.

We will of course be updating as the list grows…

4 Responses to The Super Glue Files